What brands can learn from philosophy 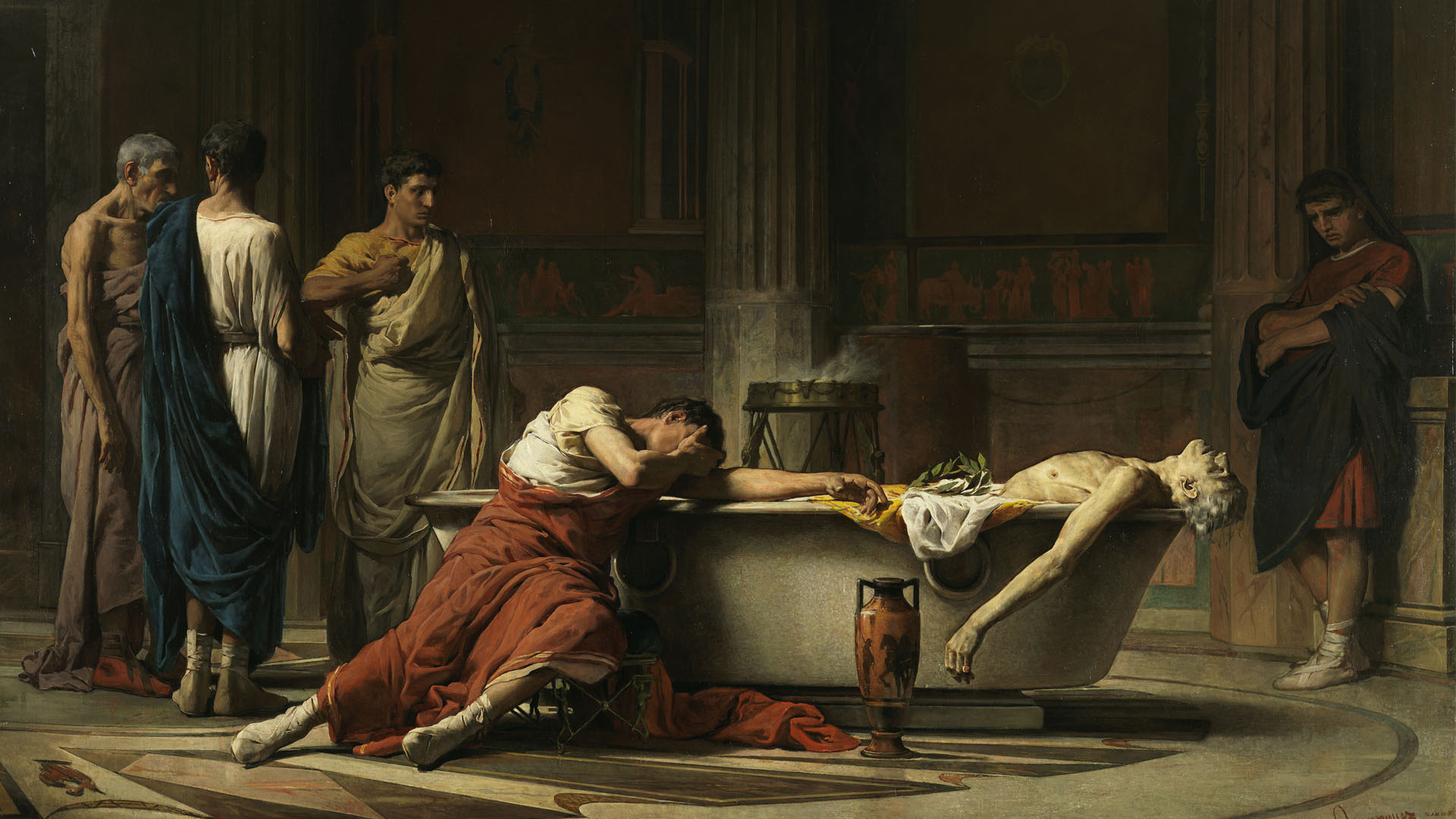 The original brand strategists were philosophers who lived 2,000 years ago.

This thought popped into my head as I re-read Letters From a Stoic by Seneca, one of the prominent Stoic philosophers. During Seneca’s exile, he wrote letters to his friend Lucilus. These letters, written by a man who was facing death after a tumultuous period in politics with the tyrant Nero, contained timeless wisdom on how to deal with anxiety, jealousy, and adversity. How to use philosophy to become a self-aware and noble human being. To lead a good life. To develop self-restraint and live a focused life.

Look at how Seneca describes the practical nature of philosophy:

“Philosophy is not an occupation of a popular nature, nor is it pursued for the sake of self-advertisement. Its concern is not with words, but with facts. It is not carried on with the object of passing the day in an entertaining sort of way and taking the boredom out of leisure. It moulds and builds the personality, orders one’s life, regulates one’s conduct, shows one what one should do and what one should leave undone, sit at the helm and keeps one on the correct course as one is tossed about in a perilous sea. Without it no one can lead a life free of fear or worry. Every hour of the day countless situations arise that call for advice, and for that advice we have to look to philosophy.”

“Builds the personality” relates to translating your origin history—what you stand for and why you exist—into a compelling story and symbols.

“Regulate one’s conduct” relates to setting constraints and guardrails governing your behavior. Every brand has a core belief. The question is, how does it behave?

“What one should do and leave undone” relates to focus, because it’s tempting for a brand to please everyone. The best brands stand for something and are totally okay saying no to others.

“Correct course as one is tossed about in a perilous sea” describes the marketplace, the relationships we have with customers and companies, and how that’s all changing very fast.

When a person embodies a philosophy, they subscribe to a set of acting principles. I like viewing it as an operating system: a set of beliefs, principles, and practices that enable you to cultivate your becoming. Like the young athlete who puts posters of their heroes on their bedroom walls, we surround ourselves with inspiring examples that are worthy of emulation.

Henry David Thoreau said, “To be a philosopher is not merely to have subtle thoughts, nor even to found a school . . . it is to solve some of the problems of life, not only theoretically, but practically.”

Practically. The philosophy I learned in college was purely theoretical. It served up grand questions on life, but never helped me apply it into my life. True philosophy doesn’t make you immune to error or failure; it helps you be resilient, and rebound quickly, from failure. Philosophy is something to return to after you’ve lost your way.

The reason why so many people love the Patagonia brand is because it behaves like a fearless, environmentally conscious human while being “successful” (owning market share, being talked about, and loved even by people who don’t own their products).

If you were to imagine the brand as a person, you’d admire that they stand against what’s fundamentally wrong in the world. They uplift others. They’re humble in their tone and way of being. They know they’re good-looking, smart, aware, and athletic—but that doesn’t get to their head. They’re on the same level as us. Eye to eye.

Every brand wishes to behave this way; to be loved and lovely. On the business side, it’s profitable to have a thriving brand.

Marketing gets you noticed. Design is how people get value from the product. Brand is the experience that becomes memory that creates love.

Seneca had another wise thought about philosophy that relates to brand:

“My advice is really this: what we hear the philosophers saying and what we find in their writings should be applied in our pursuit of the happy life. We should hunt out the helpful pieces of teaching and the spirited and noble-minded sayings which are capable of immediate practical application—not far far-fetched or archaic expressions or extravagant metaphors and figures of speech—and learn them so well that words become works.”

Too many strategies are filled with word salad. They are littered with feel-good buzzwords in a deck. It makes a pretty presentation, but is ultimately a waste of time. Worse, clients can be so blinded by these fancy words that they forget to ask the important question: What does it look like in practice? How do these words become works?

When a company gets flamed in the media for misbehaving, sometimes it’s because society shifted and they didn’t. It’s also because media pours gasoline on an already blazing fire and people are drawn to it like mosquitos. They abandoned their philosophy. They let fear and externalities dictate their behavior. They were ruled by the mob, not by their inner principles, their operating system. In the pursuit of trying to be something for everyone, they abandoned the purpose they stood for. They became media-trained. They did not deliver on their promise.

It’s like walking in on that popular high school student doing something atrocious. Out of character. All those years of good deeds, spoiled because of this one bad one. Reputation, brand credibility, and credit scores suffer the same fate.

Most people don’t understand the idea of a brand beyond the logo.

Advertisers who pretend to be brand builders believe brand = logo and billboards and Super Bowl commercials.

They are not wrong, but it’s not a complete picture.

Branding goes all the way back to ancient Egypt. “The dynamics of the brand reputation helped build better businesses even back then, and the role of the brand—a barometer of value—has continued ever since,” Debbie Millman said in Brand Thinking and Other Noble Pursuits.

The symbol on cattle was a promise of quality. It set an expectation. Over time, if the product was great and continued to deliver on the promise of high quality, people told that story to their friends. Of all the cows you could purchase from a farmer, the branded ones drew attention because the seller could tell you a story about its origin and caretaker.

Fast forward to radio and television. Brands were about jingles and print ads, and then television opened up new possibilities. With T.V., people could associate a brand with personal status. If the ad was connected to a celebrity, it created a halo effect and, ultimately, a desire.

Then came the internet and social media. In the world we live in today, brands can be built up or shut down faster than ever before. Because people are connected through social media, stories spread fast. Customers talk to each other. And probably for the first time in our history, founders of companies (and their employees) are in the public light.

When a new customer discovers your product, their brain is scanning for all the cues that signal trust. They are comparing your product with others in the marketplace. Deep down, they want reassurance they won’t feel stupid for using your product.

If brands of the past were static, today’s brands are living beings.

When you ask someone to talk about a brand they love, which is a funny idea in itself, they talk about brands as if they are people. The feelings of belonging, of being seen, supported, empowered, inspired. A brand that stands for something or has an inspiring mission. Who knew that shoes or software could elicit those feelings in us? Branding is a function of human nature.

Have you ever criticized a brand harshly on social media? In front of a friend? Look at how quickly people will defend a brand they love. They defend it not because they work at the company or give them money (maybe); they defend it because it feels like an attack on their identity, the core of who they are. It is also an attack on the tribe they’re part of.

Dr. Dori Tunstall had an incredible insight in Millman’s book:

Building a brand today—it’s about behavior

Brands are about behavior. Product functionality may be similar, but how they show up in culture and how they respond to real-time events is part of building a strong business. This behavior will get you written about.

A brand like Cash App is different from Venmo and Zelle. Cash App led the initiative for athletes to get paid in bitcoin. They work with musicians, promote their tours, and give away money to fans. Their Instagram is fucked up and weird. They released well-designed merch. They’re connected to hip-hop culture. Venmo was my generation’s way of transferring money to each other after brunch because no one seemed to have figured out split payments. Their attempt at making the feed interesting was a failure—no one cared. Zelle isn’t sexy at all, but they’re baked into many enterprise companies.

A brand like Patagonia is different from North Face or Backcountry. They’ll close on Black Friday even when sales are at their highest. They’ll ruthlessly push against political agendas that harm the planet. Other brands might do this, but Patagonia did it first and kept doing it consistently. They did it the loudest because they were living their brand promise and purpose. They did it at a time when other entrepreneurs would admire their efforts and shout it from all of their channels.

This is all behavior. Not just how it looks or sounds or what it posts on their Instagram, but how it acts alongside culture. Is it in tune with the culture and does it push it forward? Is it showing new possibilities that no one else could have seen? Or does it merely exist?

A company without strong branding can still survive. It can be profitable. It can grow slowly. But if you want a great company, a category of one, then you have to invest in brand.