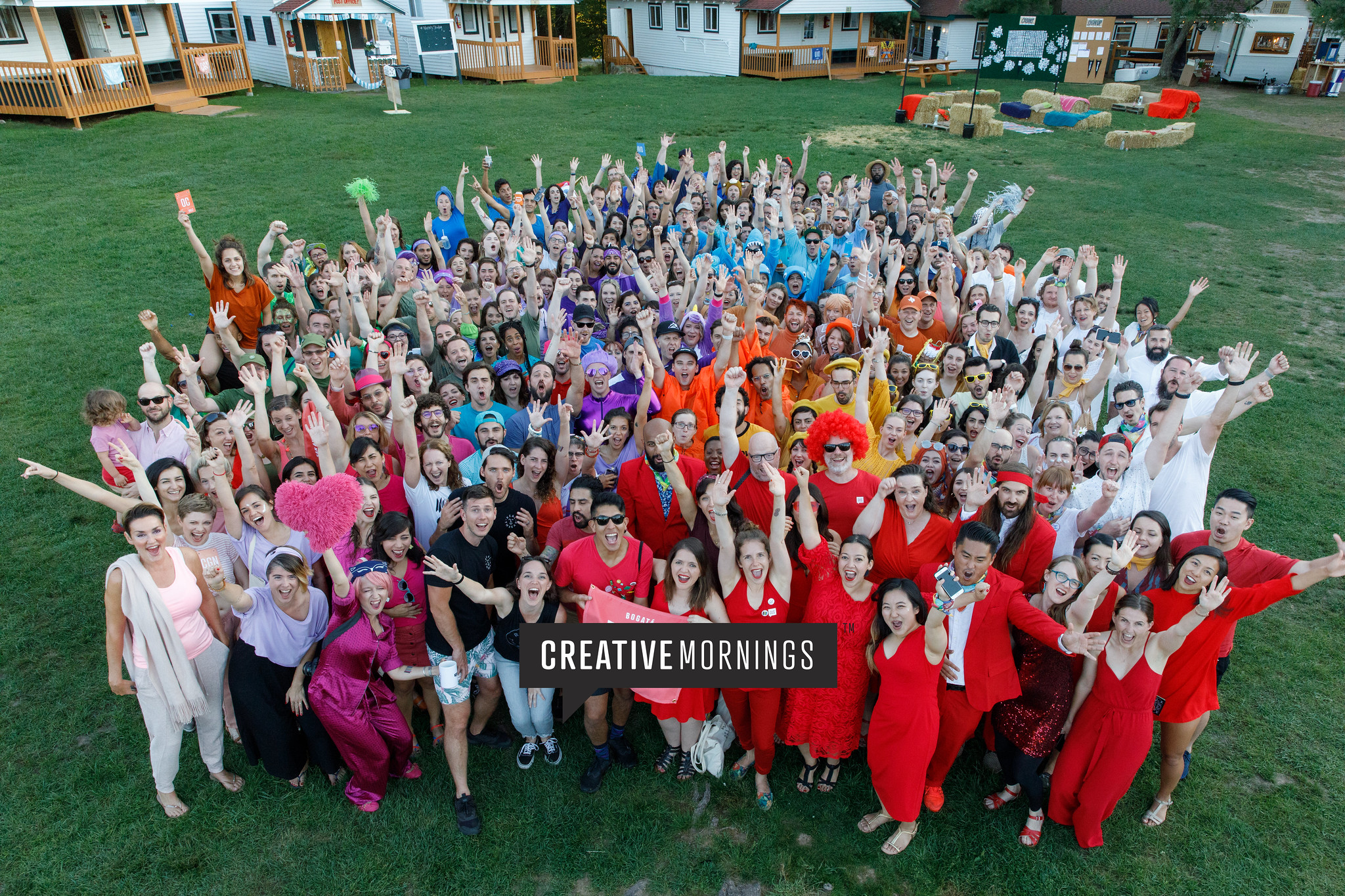 In early 2016, I was freelancing and feeling the tensions of isolation, stagnation, and financial uncertainty. Can you resonate? I applied to over 30 companies in three months which resulted in two phone interviews that ended with “Unfortunately….” I almost called it quits, and I even considered a career change, and then my friend Sean sent me a job posting from CreativeMornings. “I know the founder, and I can introduce you,” he assured me.

I knew of Tina Roth-Eisenberg from her 99u talk, and I deeply admired her creative philosophy and leadership style — “Don’t complain, create." I watched a few CreativeMornings videos, and I resonated with the heartfelt storytelling I observed, but I really had no concept of what CreativeMornings was or the impact it had on local communities around the world. The wildest part? I had never been to a conference or any kind of creative event, ever.

The initial interview and conversations made me believe that this was a dream gig, a role that would help me refine my skills and learn new ones, and most importantly to me, a community of like-minded people to which I could belong.

However, I almost said no to taking on the role. The story I told myself about the sacrifices that I had to make were rooted in fear, not in possibility: moving to Brooklyn, which was double the rent and half the space, taking a pay cut, no close friends or connections, and my first office job. I didn’t know if I could transfer my introverted, freelance lifestyle over to a confetti-filled, rollercoaster ride of joy that this office’s energy exudes.

My friends were the ones who helped me realize the ways I could grow and the lifelong lessons I would learn. They were right — for most of my creative career, I lived with envy. Living in New Jersey, on the edge of one of the greatest cities in the world, I looked at the worlds of design, writing, and entrepreneurship and noticed these little communities that formed and empowered careers far more than the way I was able to do on my own. It’s much easier to form connections that way. I remember reading an Elle Luna piece where she described her time at IDEO, saying it was the place where she learned everything she knew and how it was the foundation for her next chapter. What I failed to realize was that I’d had an experience like that already: working with Seth Godin on the altMBA. That experience fundamentally changed my life, and it’s what got me in the door to take on this role.

By now, it’s obvious that I said yes, and it’s obvious that the last 2.5 years changed my life again. Below are my lessons learned in my time of serving as Head of Content for the largest face-to-face creative community in the world. CreativeMornings is an organization that’s often described as an engine of generosity — an event series that is magical and doesn’t feel like anything else I’ve ever experienced — and my role there allowed me to develop valuable skills and connect with like-minds that have added so much richness and texture to the fabric of my life.

For most of my life, community meant my childhood best friends. They were the people that I could call in the middle of the day or night and were willing to help me through, well, anything. They were people who engaged in real talk, 24/7.

A few months after joining CreativeMornings full-time in 2016, we had our biennial Summit gathering for our organizers in Austin, Texas. I was still extremely skeptical of how all of this was working and if it lived up to the hype — the business model is insane, I had never volunteered for anything in my life, and I was curious as to why people committed 40+ hours a month to host one free monthly event on a Friday. What did it mean to them?

I met over 250 organizers from 30+ chapters around the world. I hugged over 250 strangers in three days. We engaged in real talk right from the start. I learned about what they were doing with their chapters and for their local communities — how they were connecting people together and creating real change. I heard stories about scrappy endeavors like baking bread at 5 a.m. because they couldn’t find a food sponsor. I saw photos of volunteers brewing coffee, setting up venues, and welcoming attendees with smiles, hugs, and high-fives — and then going to work afterward. I heard stories of people moving to new cities, feeling lonely, and all of a sudden finding their people at a CM event. I hadn’t experienced this type of community and connection before, but I was immediately drawn to it and changed by it.

Community is a space where you’re respected, heard, and seen. In the words of our founder, Tina, a community is only a community when it self-organizes. A community, as I see it, is a fundamental necessity of the human condition. We form communities around books, games, TV shows, food, and common experiences. What that translates to is simply that we’re human beings connecting on an idea or belief that reflects who we are and what we love, and by connecting with other people about that thing, our sense of self evolves and is enriched throughout the process.

Community is a feeling that you’re part of something that uplifts you and allows you to see eye-to-eye with different people from different backgrounds. A community holds you to a higher standard; it encourages you to focus on possibility, not fear.

The epitome of community is simple: You would rather be in the room with your people than be alone. You show up because of a purposeful, shared activity.

Expanding my understanding of generosity

What does it mean to be generous?

When local companies provide breakfast to a chapter without asking for metrics but just because they just want to support the local creatives and the gathering, that’s generosity.

When a volunteer shows up time and time again, doing more than what’s asked because they love taking care of other people, that’s generosity.

When a global partner signs on to support the salaries at HQ without breathing down our necks about metrics or access to our attendees, that’s generosity.

When over a dozen companies donate their products to give to our organizers at the 10th Anniversary Summit, because they see what we are building and want to support it wholeheartedly, that’s generosity.

Generosity is also about attention.

Generosity is not a token for building karma — it builds something better, which is character, and character is what sparks connection and trust with others. A person can’t read your karma, but when you walk into a room, they can read your character. A person who builds their character on generosity is a person who is sought after, hired, and welcomed. The reason our attendees love their local chapters is because every detail — the sign-in, the flair, the food, the host’s presence on stage, the stories that our speakers tell — has love and generosity woven into it. We are all perceptive to these details. We instinctively know when love and joy and generosity are at the forefront of someone’s actions.

Belonging to something bigger than myself

For many years in the beginning of my creative career, I wasn’t part of a creative community. Sure, I had Twitter friends and email allies, but as a writer, my comfort was sitting in solitude, embracing flow state, producing work, reading books, and then hanging out with friends. I thought I could sustain that forever. But as I began to stagnate creatively and experience frustration and cynicism, I could see that I needed something more.

I immediately felt a sense of belonging at the first CM event that I attended. “Hi, my name is…” was immediately followed up with curiosity and questions like, “What are you working on?” Finally, I thought, people who speak my language and can nerd out about side-projects, things in the industry that need attention, the future of creativity, and more. Looking back, I can attribute the community I belong to as the single greatest catalyst for my personal and creative growth.

I realized something similar while working with CM that I discovered when working with the altMBA: A lot of people today are lonely. The meaningful conversations that they’re having online or in intimate gatherings are not readily available at work, at home, or with their partners. It seems like we’re living in a time where we’re all desperately seeking that sense of belonging, because when we see others connected to a community, we notice the immense benefits it has on their livelihood.

Seth Godin has a name for this: impresario. An impresario, as I learned in his workshop in 2013, weaves together resources, people, and opportunities, and puts on a show. Getting the right people, in the right room, for the right reasons, is some of the hardest and most valuable work of our creative future. If you can become a person who creates meaningful in-person gatherings, you’ll never run out of work and you will build a reputation and character that will be sought after.

Flipping constraints to our advantage

It’s easy to believe that if you had all the money in the world, you could put on a better event than one with very little money or resources.

The truth is, it’s never easy, and you’ll never have enough money.

When you play victim and surrender your creativity to a lack of money, you miss out on learning an essential skill to leading a creative life — flipping constraints to your advantage.

When we were organizing the 10th Anniversary Summit at a camp in upstate New York for 300 organizers, we had to get scrappy. We used leftover wood to create signage and hired an illustrator to make it fit the theme of a summer camp. It didn’t matter if there wasn’t a kombucha fountain or a fancy photo booth — what mattered were the people there and the clear purpose of why they chose to show up, and we did all we could to honor that.

I’ve seen speakers drop out the day before the talk, and the hosts and organizers flipped this adversity into connection by putting on workshops, asking audience members to take the stage, and creating stations for attendees to collaborate with their neighbors. I mean, why not? The breakfast is hot and people don’t want to go back to work.

Looking to the next chapter

Nearly three years later, I look back and see that young, arrogant Jersey boy and think, “Oh, you poor thing. You knew nothing.”

I am enormously lucky to have been part a small yet mighty team and under the soulful, pure-hearted leadership of Tina. I’m lucky to belong to a global creative family, knowing that I can visit a city and immediately connect with my people.

Like many attendees around the world who experienced a CreativeMornings event and its community, I understand the impact that community can have. Everything I know about building in-person communities, creating events, and owning creative campaigns that serve our people, I learned here through running the marketing/content for a beloved organization. The many hats worn throughout my time here were like resistance bands that made me stronger. The openness, autonomy, and culture of our organization certainly spoiled me — does it get better than this?

Thank you for letting me serve you, for reading the Weekly Highlights, for supporting your local chapter, and for the work you do. See you at the next event!

Leave a replyReply to